Home » Helping Others » Jesus & the Shrinks » Jesus and the Ambivalent Kids (What Would Fromm Do?)

What Really Happened
In Matthew 21:23-27, the chief priests and elders question Jesus about His authority. In response, He offers them the following story:

Matthew 21:28-32 28But what do you think? A man had two sons, and he came to the first and said, “Son, go work today in the vineyard 29And he answered and said, “I will, sir”; and he did not go. 30And he came to the second and said the same thing. But he answered and said, “I will not”; yet he afterward regretted it and went. 31Which of the two did the will of his father? They said, “The latter.” Jesus said to them, “Truly I say to you that the tax-gatherers and harlots will get into the kingdom of God before you. 32For John came to you in the way of righteousness and you did not believe him; but the tax-gatherers and harlots did believe him; and you, seeing this, did not even feel remorse afterward so as to believe him.” 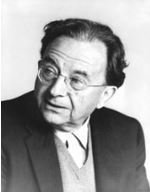 What Would Fromm Do?
The young man sat dejected and angry in Fromm’s office as he described the escalating conflict he had with his father over his choice of careers. (Dad wanted him to join the family business.) Yielding to Dad was a safe choice – used car sales were booming – but every time he thought about it part of him died inside. Yet he hesitated to say no. Going it alone scared him; he felt somewhat helpless to handle the many responsibilities that come with independence. Suddenly he blurted out his question, “Dr. Fromm, what do I do?” Fromm, recognizing the familiar dilemma, sat back and offered the young man this story:

A man had two sons, and he came to the first and said, “Son, come to work with me today and learn how to sell cars.” And he answered and said, “Sure, Dad.”, but he never showed up. The next day the father approached the second son and said the same thing. But that son answered and said, “”Forget it. I hate selling cars!”; yet he afterward felt guilty and went to work for his dad.

“What do you think?” Fromm asked. “Which of the two acted with authenticity?”

The young man considered Fromm’s question and realized that neither son had acted with authenticity. Then he wondered, What would Fromm do in my situation? He knew immediately: Dr. Fromm would be true to himself. Of course! Authenticity – that was the key. The young man had had enough of saying one thing and doing another. He’d said “yes” before but done nothing, just as he’d gone back on his “no” because he felt guilty about following his own dreams and fearful of being on his own. He was a stranger to himself, alienated from who he was. Authenticity had strong appeal. It carried such a sense of self-confidence, power, and freedom. The young man made a rational choice: he would, without guilt or hesitation, tell his dad that instead of selling cars he would now pursue his desire to become a bush pilot.

Fromm felt pleased. The young man had moved beyond his immature dependence on his father’s wishes, broken free of his father’s authority, and become his own man. He had grown to trust that he knew best what was right for himself. No longer did he feel guilty about his own strength and individuality. Now he was free to say “no” to his dad, free to say “yes” to his true self, and free to courageously follow his rationally chosen path.

Jesus and the Ambivalent Kids (What Would Fromm Do?)
© Lynne Fox, 2016
biblegrapes.com

See All JESUS & THE SHRINKS Posts

Jesus and Fromm: A Discerning Look

Jesus and the Adulteress (But What Would Freud Do?)

Jesus and Freud: How They Agree … and How They Don’t