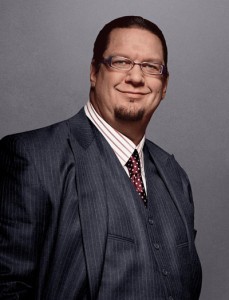 Penn Jillette (of the comedy/illusionist team, Penn and Teller) put out a 2009 YouTube video that every Christian needs to watch. In the video Penn clearly states he’s an atheist and just as clearly repeatedly praises a Christian man who comes up after a show and gives him the gift of a bible.

Penn is outspoken about his atheism but speaks thoughtfully. He is not a bigot. He sees behind the man’s beliefs (with which he deeply disagrees) to the man’s heart (for which he has deep respect). And Penn is deeply drawn to the man (though not to his faith). He supports the man’s proselytizing.

What’s proselytizing? Literally the word means “to come towards” someone with the hope of converting them to your faith. A lot of people (including many of us Christians) do that rather badly. We push and argue; we open our mouths and close our ears. It seems to me that we care more about winning than we do about loving. How very rude. How unlike Jesus.

Penn makes quite clear that he doesn’t believe there’s a God, a hell, or any need for rescue from hell. The man who approaches him believes differently, and cares enough to offer this professed atheist a gift that he hopes will save him from death. Offering an atheist a bible is not exactly a “cool” thing to do – at the very least it’s socially awkward. Yet this bible-bearing man takes a risk that few of us take. We tend to avoid public awkwardness; we back off from feeling foolish. This man doesn’t, and Penn finds his caring profoundly good. Penn is right.

I urge you. Watch Penn’s video, A Gift of a Bible. After a 3-minute introduction, Penn makes a profoundly important point: How much do you have to hate someone to hold back an action that you believe determines whether they live or die? Watching this video may well change the way you approach those who don’t yet know Jesus.

Would that we all would have the courage to speak respectfully, lovingly, and personally to those who don’t share our faith – because we care.

Penn Jillette – A Gift of a Bible
© Lynne Fox, 2016
biblegrapes.com

Are You Pro-Choice or Pro-Life? (I’m Pro-Both)

4 thoughts on “Penn Jillette – A Gift of a Bible”