Being good to someone who’s has no interest in being good to us is, to say the least, counter-intuitive. It’s one thing to refuse to retaliate; it’s quite another to deliberately help an enemy. Doing good to our enemies goes against every human instinct we own. It makes us most uncomfortable. It’s so unlike us – and so like God.

In the Garden, God Does Good
Cartoonists and scholars alike portray God as angry and vengeful. In their imaginations God scowls with rage as He points an angry finger at Adam and Eve and throws them out of the garden. These interpreters need to read the text more carefully. God responds to Eden’s sin with kindnesses that often go unnoticed:

Rather than cursing them, God carefully provides for their good.

In the Gospels, God Does Good
You might be able to quote John 3:16 (For God so loved the world, that He gave His only begotten Son, that whoever believes in Him should not perish, but have eternal life), but I’ll bet you can’t quote the next verse: For God did not send the Son into the world to judge the world, but that the world should be saved through Him.

Pay attention to John’s words: God did not send the Son into the world to judge the world but to save it. That’s amazing news. Rather than cursing us, God carefully provides for our good.

In our Lives, We Send Away Good
We’re not very adept at following God’s example. We want others to pay when they wrong us. You hurt me; you inconvenience me; it costs you. If I’m honest, I want someone to suffer when they do no more than beat me to a parking space. (Maybe they’ll dent a fender because they’re rushing…nothing too severe, mind you, just something appropriately painful.) You do the same. Sometimes you don’t even want to give someone the time of day, much less give them a favor or a kind word or an attentive ear to listen for the message behind their wounding words. We each want to retaliate. We want vengeance, human style vengeance. It’s our knee-jerk reaction, Instead of sending away vengeance, we send away good.

We balk at sending away vengeance because, as we whine, “It’s not fair! – at least not fair to us. And that’s true. If we forgive an enemy they don’t get the pain they deserve. But we forget that when God forgives us we don’t get what we deserve. That’s not fair either. And how about the cross? That’s where Jesus got vengeance He didn’t deserve. Was that fair? Jesus did speak from the cross, but He but never uttered the words “It’s not fair.”

God’s Unique Vengeance
God does vengeance differently than we do. Two differences come to mind:

Think what the world would be like if there were no check on wrongdoing. Evil unchecked would literally be hell on earth. God loves us too much to passively observe evil without responding. We react the same way when someone we love has been hurt. We even react that way around strangers. Have you ever flinched when you see a parent demeaning their child in public? Have you wanted to wisely intervene?

Neither we nor God wants evil to run unchecked. That must not happen … and it didn’t. God made sure of it on the cross. He’ll make sure of it again when this world ends. It’s one way that God does us good.

You may not think that you have any ill-feelings towards anyone (particularly if you don’t have to interact with them). So let’s make it personal. Whom wouldn’t you like to see in heaven? Anyone, alive or dead, that you can think of? That’s whom you haven’t forgiven.

And One More Question
Have you received God’s forgiveness for yourself? 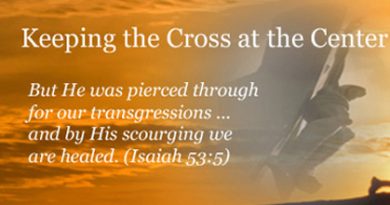 One thought on “Forgiveness: Sending Away Vengeance”